But to build a house, you need land. I looked into the price of land in Austin. (I’m an economist. It’s what I do for fun.) I crunched numbers on the prices of empty lots that were sold in 2019 and 2014. From that data, I’ve calculated the expected price for any lot anywhere in Austin. Let me tell you what I found.

I found that the price of land is affected by the distance to downtown. It is no surprise that the price is highest in downtown and drops as you get farther away. To be precise, the price is cut in half for every 14 minutes you drive away from 6th and Congress. (That drive time is not during rush hour.) Austin could lower land prices by improving traffic, but it is expensive to build highways and subways. And I promised you that we could lower land prices by changing our laws.

The other big thing that affected the price of land was the size of the lot … and Austin has a law about the size of lots. Austin’s laws require a minimum size for a lot. So, to build any house, you need at least 5,750 square feet of land. That’s a little more than 1/8th of an acre.

I’m sure when I said “the size of the lot affects the price,” it was also no surprise.  Everyone knows that a bigger piece of land is going to be more expensive.  I mean, if a 1-acre lot is 8 times bigger than a minimum-sized lot, its price should be 8 times higher, right?  Land is land, isn’t it?

Think about that.  In price-per-acre, minimum-sized lots are 4 times the price of 1-acre lots.  Land is land, right?  How can land cut into 8 pieces be worth 4 times more than the same amount of land as 1 single piece?  How can it be worth over a million dollars more? 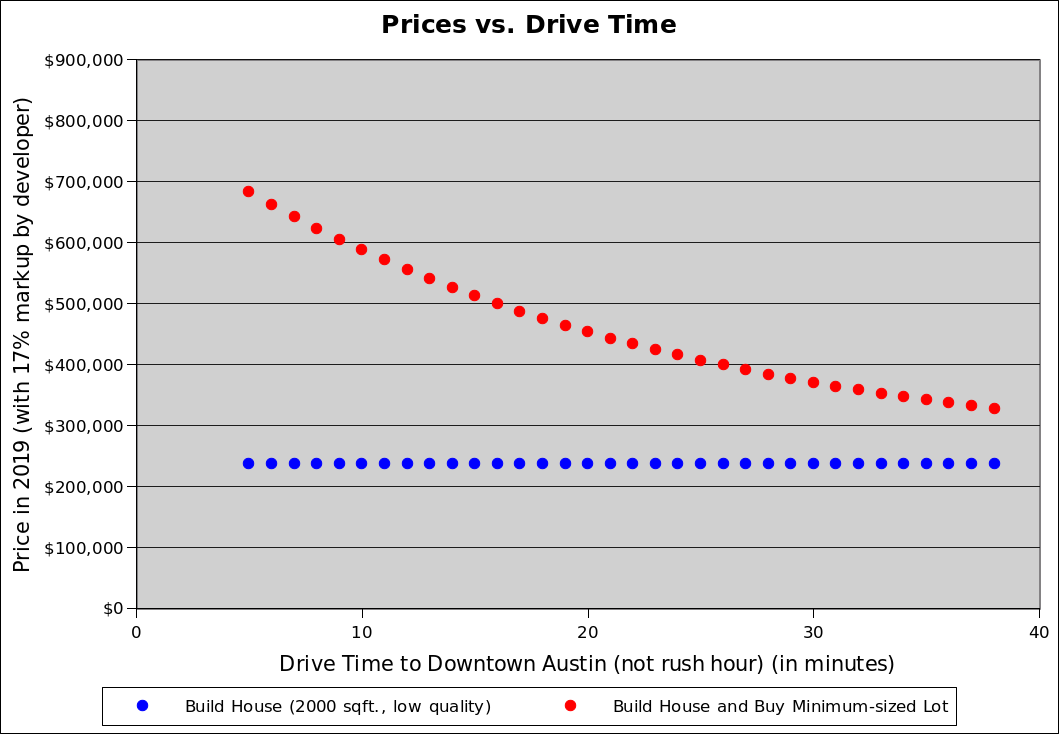 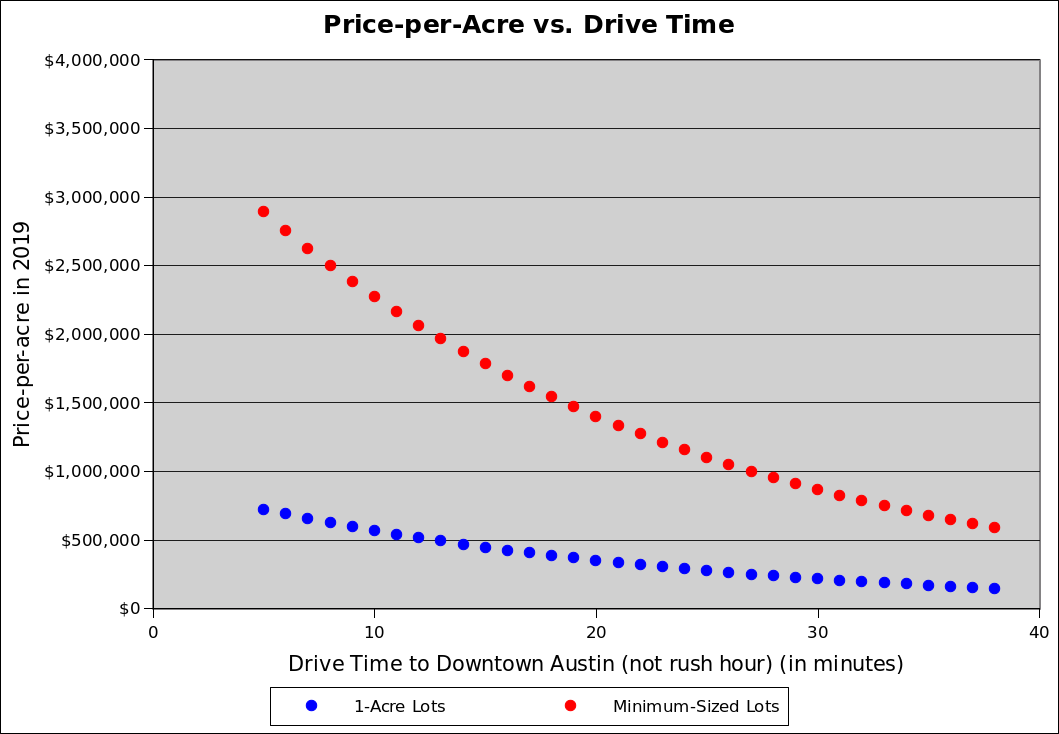 How can we change our laws to lower the price of “the right to build a house” and make housing affordable in Austin?

Second, Austin should make it easier to divide a lot into smaller lots.  Our laws for subdividing require lots of time, paperwork and money.  Moreover, the law puts numerous requirements on lots that make it difficult to do at all.

Lastly, Austin should allow more houses (or housing units) on each lot.  Minneapolis just legalized “triplexes everywhere”, which tripled the amount of “right to build a housing unit”.  And, as any economist will tell you, increasing the supply of something will drive down its price.

You should think of the price of “the right to build a house” as the membership fee to join the country club of landowners in Austin.  And right now, the fee to join the country club that is 20 minutes from downtown is $150,000.  It is absurd that our city’s laws should support something like that.  Please write City Council and ask them to improve Austin’s land use laws.  They need to eliminate minimum lot sizes, make splitting lots easier, and increase the number of units allowed on each lot.  You should also join AURA and help us in this fight to make housing affordable for everyone.

My full analysis of Austin’s land prices is available here.

AURA is an all-volunteer grassroots urbanist organization focused on building an Austin for everyone.